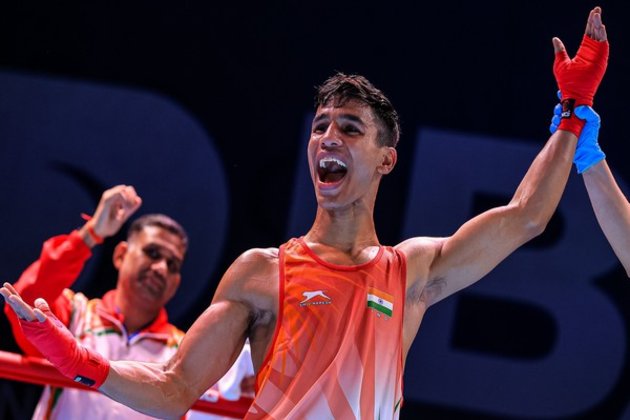 La Nucia [Spain], November 24, 2022: Young Indian boxers continued their dominance at the International Boxing Association (IBA) Youth Men's and Women's World Boxing Championships 2022 as seven of them stormed into the finals after their stunning victories in La Nucia, Spain.

Youth Asian champions Vanshaj and Vishwanath Suresh marched ahead along with Ashish to maintain an all-win record for India in the men's semi-finals whereas Kirti (81kg), Bhawna Sharma (48kg), Devika Ghorpade (52kg) and Ravina (63kg) progressed in the women's section.

While Chennai boy Vishwanath claimed a 4-1 win over Juanma Lopez of Puerto Rico, Vanshaj (63.5kg) and Ashish (54kg), who hails from Haryana, posted close 3-2 and 4-3 triumphs against USA's Deshawn Crocklem and Uzbekistan's Khujanazar Nortojiev respectively in their thrilling semi-final encounters as read in a statement released by Boxing Federation of India. .

Ravina and Bhawna outpunched their Kazakh opponents Assem Tanatar and Gulnaz Buribayeva respectively by unanimous decision. Maharashtra girl Devika got the better of USA's Aameedah Joy with a 4-1 margin.

Indian boxers have reasserted their supremacy at the prestigious championships as 11 out of 17 quarter-finalists went on to confirm medals--the highest for any country at the ongoing edition, wherein close to 600 boxers have participated from 73 countries.

Uzbekistan are second with 10 confirmed medals while Ireland and Kazakhstan are placed jointly in the third position with seven medals each.

India's dominance in the women's section is another highlight of the tournament as eight pugilists have secured medals which is the most for any country followed by Kazakhstan (5) and Uzbekistan (4).

Bhawna and Devika will fight for gold on Friday along with all three male boxers while others will play their finals on Saturday. (ANI)

MOSCOW, Russia: Russian officials have said that some 2,500 Caspian seals have been found dead on the Caspian Sea coast ...

Indonesia to outlaw sex outside marriage

JAKARTA, Indonesia: In a legal overhaul that critics say could curb freedoms and police morality in the world's third-largest democracy, ...

Hawaii braces for eruption on Big Island of Honolulu

HONOLULU, Hawaii: Officials are concerned that a major eruption of the Mauna Loa volcano on the Big Island of Hawaii ...

BUENOS AIRES, Argentina: A massive wave struck the Viking Polaris cruise ship this week as it was sailing toward the ...

After years of upheaval, US judge throws out Huawei fraud indictments

NEW YORK City, New York: Last week, a U.S. judge has dismissed an indictment against the chief financial officer of ...

NEW YORK, New York - U.S. stocks were bought up on Thursday, with all the major indices finishing with appreciable ...

WELLINGTON, New Zealand: The government of New Zealand said it will introduce a law requiring major online digital companies, such ...

China to sell electric vehicles in Japan in 2023

Change comes to US auto union as reformers win elections

NEW YORK, New York - Stocks in the U.S. and around the world fell on Wednesday although losses were mostly ...

Hearing aids now sold without prescriptions in US

WASHINGTON D.C.: Hearing aids can now be sold without prescriptions from a doctor in the U.S., making it easier and ...