OTTAWA, ON, Oct. 18, 2022 /PRNewswire/ -- In response to increasing market demand for greater transparency in the provenance of precious metals, and to showcase its continually evolving refining capabilities, the Mint is introducing its first gold bullion coin completely sourced from a single mine.  The 2022 $50 1 oz. 99.99% Pure Gold Maple Leaf Single-Sourced Mine bullion coin is entirely composed of gold extracted by Agnico Eagle at its Meliadine Mine in Nunavut (Canada) and expertly refined by the Mint, under a rigorous segregation protocol. This special gold bullion coin will soon be available through the Mint's network of official bullion distributors. 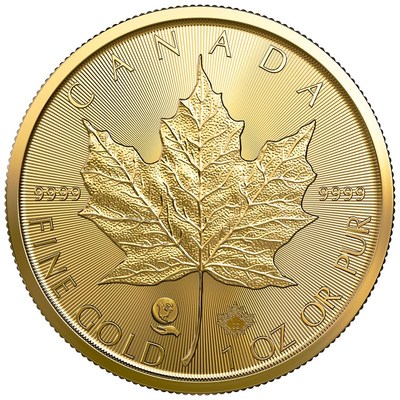 "Precious metal investors have long trusted the Royal Canadian Mint for the market-leading purity and security of its bullion products.  As an LBMA-accredited Good Delivery refiner, they can also count on us for responsibly sourcing the gold and silver we refine," said Marie Lemay, President and CEO of the Royal Canadian Mint. "By launching a new bullion coin made of gold sourced entirely from Agnico Eagle's Meliadine mine, we are also showing the market that we can offer bullion with the highest possible integrity, guaranteeing that it originates from a single Canadian mine."

"Agnico Eagle is proud to be a partner of choice as a trusted source of responsibly produced gold for the Royal Canadian Mint's first-ever single-source mined gold bullion coin," said Ammar Al-Joundi, President and CEO of Agnico Eagle Mines. "We have built a strong culture of responsible behaviour and have been responsibly developing Canadian mineral resources in Nunavut for more than 13 years. We strive to be a good employer and a good neighbour and we are proud of the value we bring to the local communities and society in general. We do believe that mining, when done right, can contribute to building a better world."

The reverse of the Mint's first-ever single-source mined pure gold coin features Walter Ott's detailed engraving of a Sugar Maple leaf, the hallmark of the Mint's Maple Leaf family of bullion coins.  This central design is also surrounded by an array of precisely machined radial lines.  Beneath it appears a micro-engraved maple leaf-shaped security mark containing the engraving of the number "22", only visible under magnification, to denote the coin's year of issue.  Adjacent to the security feature is a privy mark of a hand cradling a globe, symbolizing the single-source provenance of the coin's 99.99% pure gold.  The coin is also protected by Bullion DNATM technology.

This exceptional gold bullion coin is encapsulated in credit card-style packaging that includes a certificate of purity and authenticity signed by the Mint's Chief Assayer.

Since its founding in 1957, Canada-based Agnico Eagle has grown into Canada's largest miner of Canadian gold, as well as the world's third-largest gold producer overall. Its Meliadine mine, which began commercial production in 2019, is the company's second gold mine in the Kivalliq District of Nunavut.

Images of this new coin, and of the Meliadine mine are available here.

With the exception of limited offerings at its Ottawa and Winnipeg boutiques, the Mint does not sell bullion directly to the public. This practice is consistent with the distribution model common to the world's major issuers of bullion coins. Interested buyers are encouraged to contact a reputable bullion dealer to order new bullion coins.

About the Royal Canadian Mint

The Royal Canadian Mint is the Crown corporation responsible for the minting and distribution of Canada's circulation coins. The Mint is recognized as one of the largest and most versatile mints in the world, offering a wide range of specialized, high quality coinage products and related services on an international scale. For more information on the Mint, its products and services, visit www.mint.ca.  Follow the Mint on Twitter, Facebook and Instagram.

Agnico Eagle is a senior Canadian gold mining company, producing precious metals from operations in Canada, Australia, Finland and Mexico. It has a pipeline of high-quality exploration and development projects in these countries as well as in the United States and Colombia. Agnico Eagle is a partner of choice within the mining industry, recognized globally for its leading environmental, social and governance practices. The Company was founded in 1957 and has consistently created value for its shareholders, declaring a cash dividend every year since 1983.

HONG KONG: Paving the way for a potential bumper payout to shareholders, HSBC has agreed to sell its business in ...

WASHINGTON D.C.: The National Retail Federation (NRF) has reported that even as inflation has negatively affected many household budgets, heavy ...

IRVING, Texas: Exxon Mobil Corp will wind down oil production in Equatorial Guinea in West Africa after its license expires ...