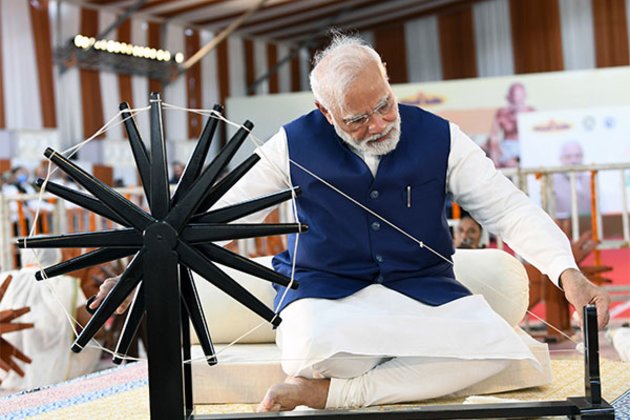 New Delhi [India], October 3 (ANI): The inspiration for Prime Minister Narendra Modi's idea of 'Sabka Saath, Sabka Vikas' goes back in time to the 1980s when his younger self-penned, in a diary that he maintained, a quote by Mahatma Gandhi.

The diary entry, unveiled by Modi Archive, a platform that tracks the Prime Minister's life, his early days and journey, features his hand-written notes and reveals his mind on a range of issues.

The entries by a young Narendra Modi depict that Mahatma Gandhi's ideals have left an impact on his life since he was young, which are also reflected in the Centre's welfare schemes.

"The only real, dignified, human doctrine is the greatest good of all," a quote by MahatmaGandhi penned by a young Modi, the public welfare schemes of whom continue to echo the Mahatma's idea - Sabka Saath, Sabka Vikas," the Modi Archive tweeted.

The Twitter handle also showed shared the moments when Modi visited Porbandar, the place where Gandhi was born and sought his blessings just days before he was sworn in as the Chief Minister of Gujarat in 2001.

"At Porbandar, the place where MahatmaGandhi was born, Modi looks at a portrait of the Mahatma. After a few days, Modi was sworn in as Gujarat's Chief Minister and has been in public office for 21 years since," said another tweet by Modi Archive.

Replying to the tweet, PM Modi shared a story of "What Gandhi Ji's home in Porbandar teaches us".

Another instance which showed that Prime Minister Modi's inspiration of converting the schemes into mass movements like the Swacch Bharat Abhiyan is drawn from Gandhi who turned the fight against the Britishers for independence into a mass movement through 'Jan Bhagidari'.

Speaking at a media conclave in 2007, Modi who was the then Chief Minister of Gujarat said, "As far as the development of concerned, it is my opinion that the way every citizen had come together during the time of independence, numerous people sacrificed and tried to make the country free, and hundreds of people were spending captured in the jails of Andaman and Nicobar, but the biggest contribution of Mahatma Gandhi was that he converted freedom into a mass movement."Modi called for a movement for development in line with the one launched by Mahatma Gandhi before independence.

"On GandhiJayanti , here's the video that defined Modi's public policy journey - the philosophy of Jan Bhagidari. MahatmaGandhi united people in their desire for freedom, through Jan Bhagidari. Modi calls for a similar movement for development," tweeted Modi Archive.

The Prime Minister had launched the schemes like Swacch Bharat Mission in 2014 on October 2, which is yet another instance depicting Mahatma Gandhi as his source of inspiration.

He along with Vice-President Jagdeep Dhankar also attended a prayer meet organised at Gandhi Smriti on the occasion of Gandhi Jayanti yesterday.

Paying homage to Mahatma Gandhi on his 153rd birth anniversary, PM Modi tweeted, "This Gandhi Jayanti is, even more, special because India marks Azadi Ka Amrit Mahotsav. I also urge you to purchase Khadi and handicrafts products as tribute to Gandhi Ji." (ANI)