TAIPEI, Sept. 27, 2022 /PRNewswire/ -- GIGABYTE is proud to launch its brand new X670E and X670 series motherboards, which support AMD's recently announced Ryzen 7000 series desktop processors based on the next-gen Zen 4 architecture. GIGABYTE's latest AM5 platform offerings are topped by the gaming-focused AORUS lineup, covering both segments of the flagship X670E and the high-end X670 chipsets. In addition to natively supporting the next-gen PCIe 5.0 slot and M.2 socket, as well as the DDR5 memory, the new AORUS X670 motherboards are all about big performance and system stability, with direct digital power and advanced thermal solutions. At the same time, these boards are designed with user-friendliness in mind, featuring PCIe and M.2 EZ-Latch design to make component swapping a whole lot easier. 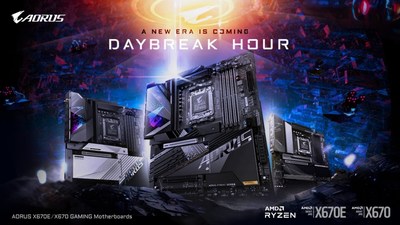 The X670E AORUS XTREME leads the way with an 18+2+2 direct digital power, which effectively improves system stability for unlocking the full potential of the new Ryzen 7000 series processors. To enhance the overall heat dissipation under overclocking and full-speed operation, GIGABYTE X670E and X670 motherboards are stacked with advanced thermal designs, such as the 8mm Mega-Heatpipe, the full-coveraged VRM heatsinks, and the M.2 Thermal Guard III heatsinks on the storage devices, so that the next-gen gaming performance and transmission speed can be fully unleashed on the new platform. The newly incorporated EZ-Latch Plus design on the X670E and EZ-Latch on the X670 motherboards streamline the PC building process by simplifying the graphics card removal with only an effortless push of a bottom and making M.2 SSD installation easier than ever without the use of a single screw.

MOSCOW, Russia: Russian officials have said that some 2,500 Caspian seals have been found dead on the Caspian Sea coast ...

Indonesia to outlaw sex outside marriage

JAKARTA, Indonesia: In a legal overhaul that critics say could curb freedoms and police morality in the world's third-largest democracy, ...

Hawaii braces for eruption on Big Island of Honolulu

HONOLULU, Hawaii: Officials are concerned that a major eruption of the Mauna Loa volcano on the Big Island of Hawaii ...

BUENOS AIRES, Argentina: A massive wave struck the Viking Polaris cruise ship this week as it was sailing toward the ...

After years of upheaval, US judge throws out Huawei fraud indictments

NEW YORK City, New York: Last week, a U.S. judge has dismissed an indictment against the chief financial officer of ...

NEW YORK, New York - U.S. stocks were bought up on Thursday, with all the major indices finishing with appreciable ...

WELLINGTON, New Zealand: The government of New Zealand said it will introduce a law requiring major online digital companies, such ...

China to sell electric vehicles in Japan in 2023

Change comes to US auto union as reformers win elections

NEW YORK, New York - Stocks in the U.S. and around the world fell on Wednesday although losses were mostly ...

Hearing aids now sold without prescriptions in US

WASHINGTON D.C.: Hearing aids can now be sold without prescriptions from a doctor in the U.S., making it easier and ...