TOKYO, Sept. 16, 2022 /PRNewswire/ -- Researchers at Toshiba Corporation (TOKYO: 6502) have achieved a breakthrough in quantum computer architecture: the basic design for a double-transmon coupler that will improve the speed and accuracy of quantum computation in tunable couplers. The coupler is a key device in determining the performance of superconducting quantum computers.

Tunable couplers in a superconducting quantum computer link two qubits and perform quantum computations by turning on and off the coupling between them. Current technology can turn off the coupling of transmon qubits*1 with close frequencies, but this is prone to crosstalk errors that occur on one of the qubits when the other qubit is irradiated with electromagnetic waves for control. In addition, current technology cannot completely turn off coupling for qubits with significantly different frequencies, resulting in errors due to residual coupling.

The technology is expected to advance the realization of higher-performance quantum computers that will contribute in such areas as the achievement of carbon neutrality and the development of new drugs. Details of the technology were published in the United States on September 15 in the Physical Review Applied, a journal of the American Physical Society*5.

Quantum mechanics describes the invisible world of atoms and molecules using quantum superposition states, allowing a physical system to appear to be in two completely different states simultaneously. Quantum computers make use of this mysterious property to carry out computations that are practically impossible with conventional computers, a capability that has attracted much attention in recent years.

Development of quantum computers is being promoted worldwide, and this has seen the adoption of multiple approaches, with proposals ranging from the manipulation of single atoms or ions to the use of semiconductors and superconducting circuits. The superconducting circuit approach is now seen as having an advantage in terms of realizing quantum superposition states in large circuits, and in the relative ease of achieving the strong coupling of qubits essential for the high-speed execution of two-qubit gates.

Coupling of qubits is done with a coupler (Fig. 1). Until recently, the mainstay devices have been fixed couplers with a constant coupling strength*7, but attention is now turning to tunable couplers, which are seen as offering the adjustable coupling strength necessary to improve performance.

Tunable couplers achieve contradictory requirements: a fast two-qubit gate with strong coupling, along with the ability to reduce errors from residual coupling by switching off the coupling. Also, it is preferable that the qubit used in computations is a fixed-frequency transmon qubit, which is highly stable, has a simple structure and is easy to fabricate. In addition, the frequency of the two qubits that are coupled should be significantly different, as this reduces crosstalk errors, and is robust against deviations from the design values of qubit frequencies, thereby improving yields in device fabrication. The problem here, however, is that no tunable coupler has yet been able to combine complete off-coupling and fast two-qubit gate operations for two fixed-frequency transmon qubits with significantly different frequencies.

Features of the new technology

Toshiba researchers have devised a double-transmon coupler, the world's first tunable coupler that can both completely turn off coupling and operate the two qubit gates at high speed for two fixed-frequency transmon qubits with significantly different frequencies.

The double transmon coupler comprises two fixed-frequency transmon qubits, shown as transmon 3 and 4 in Fig. 2, along with two other fixed-frequency transmon qubits, transmon 1 and 2 in the figure, used for computation. The double-transmon coupler has one loop, and the three x's on the loop represent two transmon Josephson junctions*8 and an additional Josephson junction. The magnetic flux in the loop, ex, can be tuned by an external magnetic field to bring the coupling strength between the qubits on both sides to exactly zero, completely switching off the coupling (Fig. 3). The coupling strength can also be increased to several tens of megahertz by increasing the magnetic flux, which realizes fast two-qubit gate operations. Simulations have shown gate operations with an accuracy of 99.99% are possible, with gate times as short as 24 ns. The coupler is thus expected to contribute to higher-performance quantum computers.

Toshiba plans to start to prototype and demonstrate the double-transmon coupler this fiscal year. The Company aims to make use of its characteristics to achieve the world's highest level performance in both speed and accuracy. 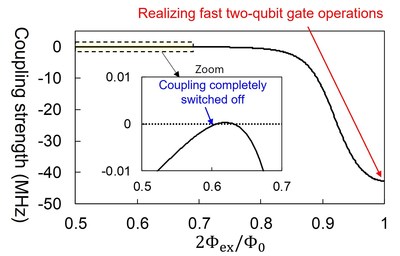 *3 Without decoherence. In practice, decoherence, which breaks the quantum superposition state due to the finite coherence time possessed by the qubit, is expected to occur, resulting in reduced fidelity.

*4 Toshiba research, as of 16 September 2022. Theoretically demonstrated by numerical simulation. A method to eliminate the residual coupling by irradiating the coupler with electromagnetic waves was reported in a paper published in July 2022 (Z. Ni et al., Phys. Rev. Lett. 129, 040502 (2022)), but it has not been reported that this method also realize fast and highly accurate two-qubit gates.

*6 In universal gate-based quantum computers. In quantum annealing for combinatorial optimization problems, gate operations are not used in quantum computations.

*7 For a fixed coupler, coupling is effectively switched on and off by controlling qubit frequencies. In this case, the qubits need to be frequency-tunable and then the coherence time is relatively short.

*8 A Josephson junction. Quantum tunneling causes Cooper pairs in the superconductors to move back and forth across the insulating film, exhibiting quantum phenomena called Josephson effects.

HALIFAX, Canada: Cyclone Fiona struck northeast Canada this weekend, with reports of houses being washed into the ocean, roofs torn ...

BRUSSELS, Belgium: In response to a new escalation in Russia's war against Ukraine, the European Union is considering an oil ...

Longstanding divisive issues between Azerbaijan and Armenia resulting from or related to the Nagorno-Karabakh conflict remain unresolved, despite continuing efforts ...

WASHINGTON D.C.: The U.S. government said it will seek the death penalty for Sayfullo Saipov, the man charged with running ...

HONG KONG: To keep the city connected with the rest of the world, while ensuring an "orderly opening-up," Hong Kong ...

SAN FRANCISCO, California: Amidst declining margins and weak sales of outdated clothes of its brands, including Old Navy and Banana ...

Many forced out as US rental apartments jump 10% in price

WASHINGTON D.C.: Young workers in the U.S. have been the group most harmed by surging rental prices, with many taking ...

US to allow more tourist flights to Cuba

WASHINGTON D.C.: The U.S. Transport Department has announced that the Biden administration has approved the expansion of U.S. flights to ...

MOSCOW, Russia: After battling supply chain issues, potato shortages and a heftyrebranding job, the successor to McDonald's in Russia, Vkusno ...

NEW YORK, New York - U.S. and global stocks continued falling Friday in a dismal end to the week. The ...