In the next iteration of the coveted Red Spade Pass, PokerStars will award epic Brazil Grand Prix experience

ONCHAN, Isle of Man, Aug. 12, 2022 /PRNewswire/ -- As the 2022 Formula One season moves into its second half, PokerStars has announced the latest way for fans to get their hands on a 'Red Spade Pass' for the Brazil Grand Prix. 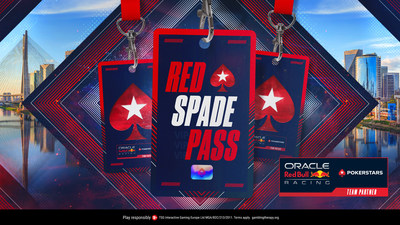 Available exclusively to PokerStars players, the Red Spade Pass will reward winners with the ultimate fan experience at Brazil's iconic Interlagos Grand Prix circuit. The experience includes an epic three days at the Brazil GP, flights, five night's accommodation in Sao Paulo, and a host of exclusive activities and guest appearances, all curated by PokerStars and enabled through the partnership with Oracle Red Bull Racing.

The first Red Spade Pass will be awarded at PokerStars European Poker Tour (EPT) Barcelona in the 3,000 buy-in EPT Platinum Pass Mystery Bounty event. The Pass will be added to the prizepool and hidden in one of the envelopes awarded to players who knock out another. Bounties will begin from Day 2, with the event running until August 19.

More Red Spade Passes will be awarded across PokerStars and PokerStars Casino, with new ways to win being announced soon.

Director of Partnerships, Public Relations and Consumer Engagement at PokerStars Rebecca McAdam Willets said: "Our aim is to give our community epic moments that they will never forget. Together, PokerStars and Oracle Red Bull Racing want to bring entertainment to all of our fans and players, and this season we've seen some fantastic moments both on and off the track. As our partnership continues to grow, we're looking forward to bringing even more unique experiences to the PokerStars communities."

To celebrate the season getting started, the first sets of Red Spade Passes awarded winners from across the globe with a four day all-expenses paid trip for two to Nice and Monaco to watch the world-renowned Monaco Grand Prix from PokerStars private luxurious waterside location, overlooking the famous track.

To give the PokerStars community even more epic rewards, PokerStars launched a season-long programme of race weekend rewards encouraging fans and players to 'Embrace the Race'. From big-money casino drops to Formula 1 themed freerolls, the epic set of poker and casino prizes rewards fans for their support of the Oracle Red Bull Racing team, with some prizes getting a massive boost if the Oracle Red Bull Racing team take the top spot on the podium!

The leading global online gambling and entertainment brand, PokerStars, announced the partnership with Oracle Red Bull Racing earlier this year. The multi-year partnership, which features branding on the RB18 and the race suits, is aimed at F1's growing audience as increasing technological advancements help to service and provide fans with new and unique ways to enjoy the sport.

PokerStars operates the world's most popular online poker sites, serving the global poker community. Since it launched in 2001, PokerStars has become the first choice of players all over the world, with more daily tournaments than anywhere else and with the best online security. More than 200 billion hands have been dealt on PokerStars, which is more than any other site.

27 ℃
Showers in the Vicinity in Seletar