BRONCUS COMPLETED SURGERIES ON THE FIRST GROUP OF PATIENTS USING ITS InterVapor, THE THERMAL VAPOR TREATMENT SYSTEM, AFTER APPROVED FOR MARKETING IN CHINA

HANGZHOU, China, July 18, 2022 /PRNewswire/ -- Broncus Medical (02216.HK) has completed surgeries on the first group of patients using its InterVapor(including InterVapor Generator and InterVapor Catheter, the "InterVapor"), after it was approved for marketing in China. This marked the official entry of InterVapor into the clinical commercialization phase in China and is expected to benefit patients with chronic obstructive pulmonary disease ("COPD"). The surgeries were completed by teams of professionals led by Professor Long Fa of the Department of Respiratory, Shenzhen Hospital, University of Chinese Academy of Science; and Professor Ouyang Haifeng of the Department of Respiratory and Critical Care Medicine, Chest Hospital, Xi'an International Medical Center Hospital, respectively. 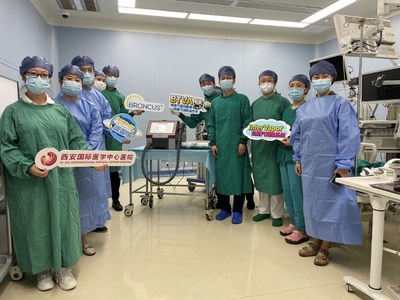 The Company's self-developed InterVapor was granted approval by the National Medical Products Administration of China (the "NMPA") in March 2022. This is the first NMPA-approved thermal vapor energy ablation systems in China and in the world for the treatment of COPD. InterVapor is a minimally invasive interventional lung volume reduction product that can achieve sequential staged treatment by targeting the lung segments, thereby leading to a new era of interventional pulmonary in China. The Company has obtained an exclusive patent for the use of thermal vapor for pulmonary treatments with a state-of-the-art technology.

During the course of the surgeries, InterVapor delivered thermal vapor bronchoscopically to the targeted lung segment and transmitted energy through air convection, which overcomes the traditional obstacles of energy transmission due to the high air content in the lungs, and hence treating severely diseased lung segments. This method of treatment significantly improves the quality of life and lung function of patients and their exercise tolerance while preserving more healthy lung tissues.

COPD is a common chronic respiratory disease and the world's third leading cause of death. According to Frost Sullivan, in 2021, there were approximately 226 million COPD patients worldwide, and at least 106 million of COPD patients in China, and the 5-year survival rate of advanced COPD patients is less than 20%. Currently, the treatment strategy of COPD is still based on drug treatment, which can delay the disease progression to a certain extent, but for severe and acutely severe patients, the effect of drug treatment is very limited. By comparing with the other treatment methods, InterVapor-based treatment technology is highly innovative and represents a breakthrough, clinically proven to be effective and safe, and fills the gap for treatment of patients with severe emphysema. Currently, InterVapor has been approved for marketing in major European countries, including the United Kingdom, Germany, Switzerland, Italy, and in Asia Pacific, 12 countries in total. The clinical data of STEP-UP trial (Sequential Segmental Treatment of Emphysema With Upper Lobe Predominance Trial) showed significant improvement in patients lung function and improved the quality of life in patients treated with Broncuchoscopic Thermal Vapor Ablation (BTVA) compared to standard treatment of a 12-month follow-up. Such treatment was included in the Guidelines of Global Initiative for Chronic Obstructive Lung Disease (GOLD). for four consecutive years from 2019 to 2022, which is recommended for patients with severe and acutely severe emphysema. In 2019, InterVapor was awarded the "Breakthrough Device" designation by the U.S. FDA.

Broncus (02216.HK) is a pioneer in the interventional pulmonology medical device market, provides innovative lung solutions in China and globally. Founded in 2012, the Company has assembled a management team with extensive experience in product development, clinical research and commercialization, and has developed into an enterprise with a China-US dual center. Through close ties with key opinion leaders in the global respiratory interventional field and the establishment of a comprehensive relationship from innovative concepts to project development and implementation, the Company has built a respiratory interventional diagnosis and treatment product pipeline comprises of 17 products and major product candidates, and owned a diversified intellectual property portfolio of 686 patents and patent applications. In addition, the Company through clinical training and market education and with its strong brand promotion and commercialization capabilities, has sales to mainstream markets around the world such as the United States, Europe, and Australia. Company's mission is to become a transformative global leader in pulmonology treatment and set its interventional pulmonology diagnosis and treatment solutions as the gold standard.