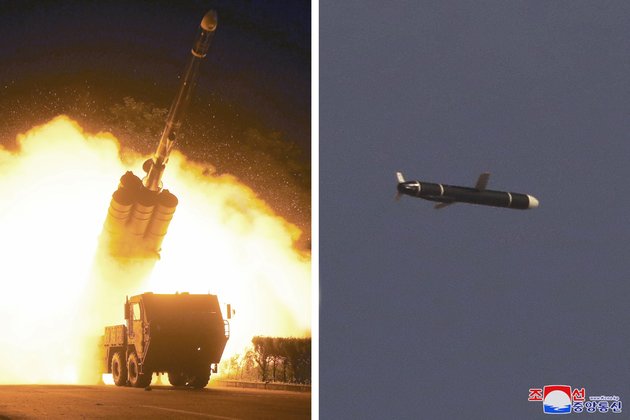 Special envoys from the United States and South Korea met with their Japanese counterpart Tuesday in Tokyo for talks on North Korea's nuclear weapons program, following tests conducted by the rogue state Saturday and Sunday.

North Korea state media confirmed the nation tested "newly developed long-range cruise missiles" Saturday and Sunday. Cruise missiles fly at relatively low altitudes and can be guided in-flight. That allows them to fly under or around missile defense radars.

Analysts say the missiles appeared visually similar to the U.S. Tomahawk, a nuclear-capable cruise missile with a range of about 1,600 kilometers. North Korea hinted the missile is nuclear-capable, though it's not clear the North yet has a nuclear warhead small enough to fit on it.

Regardless, the missiles represent another lethal component in North Korea's arsenal, which has significantly expanded since 2019 when it resumed major weapons tests.

As the three envoys addressed reporters before their talks, Kim said the recent events in North Korea are a reminder of the importance of close communication and cooperation among Japan, North Korea and the U.S.

Noh agreed, saying it was good the three representatives can have a candid discussion on how to "engage with North Korea based on our shared understanding of the urgency of denuclearization."

Pyongyang has so far rejected those overtures, saying nothing has changed from the U.S., citing issues such as ongoing sanctions and joint military drills with South Korea.

Some information for this report came from the Associated Press, Reuters, and Agence France-Presse.