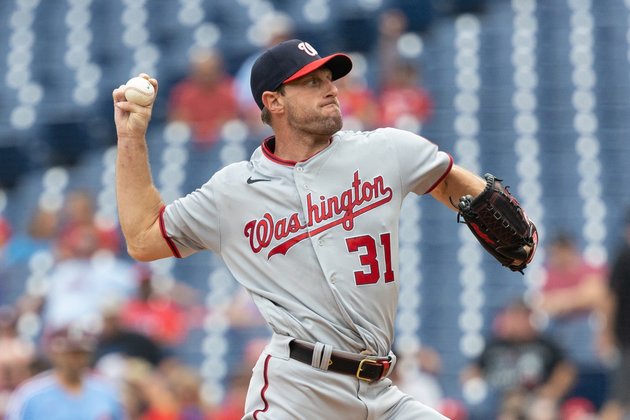 In what may have been his final start with Washington, Max Scherzer pitched a gem Thursday afternoon as the Nationals beat the host Philadelphia Phillies 3-1 in the first game of a doubleheader.

Scherzer, a World Series champ and three-time Cy Young Award winner, is expected to be dealt by the Nationals before the trade deadline on Friday.

He was a surprise starter and picked up his eighth win of the season as he went six strong innings, allowing one run off three hits with five strikeouts.

Thursday was Scherzer's 22nd start against the Phillies since signing with the Nationals in 2015. He is 13-3 in those starts, including 8-1 at Citizens Bank Park in 11 starts with Washington.

Scherzer (8-4) had already left the game and been congratulated by his teammates in the dugout when the Nationals took the lead for good.

With the game tied at 1-1, Gerardo Parra led off the seventh inning with a double and then came home on Yan Gomes' 429-foot homer to center against Philadelphia starter Zack Wheeler (8-6).

It was Gomes' ninth homer of the season. Wheeler went the distance, allowing three runs on seven hits with five strikeouts.

Kyle Finnegan came in and put the Phillies down in order (with a pair of strikeouts) to earn the first save of his MLB career.

The Nationals took the first lead of the day in the second. Josh Harrison doubled to lead off the inning, then came home on a sacrifice fly to left from Parra.

Harrison and Gomes each had two hits.

Philadelphia, which was held to three hits, tied the score when J.T. Realmuto led off the fourth with his 11th homer of the season.

The two teams were forced to play a doubleheader Thursday after the Nationals had 12 members of its team -- including four players -- test positive for COVID-19, forcing a postponement Wednesday night.