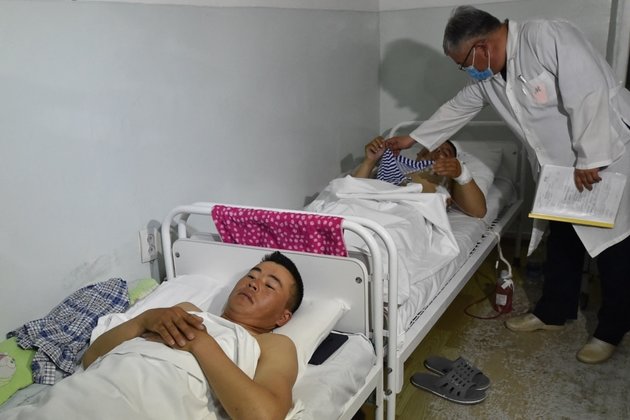 BISHKEK -- The situation on the Kyrgyz-Tajik border remains stable after deadly clashes in recent days as both sides continue to blame each other for the violence.

Kyrgyzstan's Interior Ministry said on May 4 that police were in control of the situation in the southwestern Batken Province that borders Tajikistan's Sughd Province a day after both sides announced the withdrawal of military units from the border.

According to the ministry, Kyrgyz experts are working on liquidating unexploded shells near the village of Aktatyr after fighting broke out over water facilities in territory claimed by both Kyrgyzstan and Tajikistan.

Deputy Health Minister Aliza Soltonbekova said on May 4 that a total of 36 Kyrgyz citizens died, 189 people were injured, and 58,000 were evacuated during the violence that erupted on April 28 and lasted for almost three days, Kyrgyz officials say, over the Tajik move to install surveillance cameras on the disputed part of the border.

SEE ALSO: Conflict On The Kyrgyz-Tajik Border Moves From Sticks And Stones To Bullets And Bombs

According to Soltonbekova, 51 injured people remain in hospitals in Bishkek and 49 individuals injured in the clashes are being treated in hospitals in the Batken region.

Tajik authorities have not published information on casualties but correspondents of RFE/RL's Tajik Service have reported from the area that at least 18 Tajik citizens, including 10 military personnel, were killed, 90 people were injured, and a number of private houses were destroyed or damaged in the villages of Khojai Alo and Somoniyon during the armed clashes.

Like many other border areas in Central Asia, almost half of the 970-kilometer-long Kyrgyz-Tajik border has not been demarcated, leading to tensions over the past 30 years.

The latest fighting was the heaviest in years and raised fears of a wider conflict between the two impoverished neighbors.

The European Union, the Organization for Security and Cooperation in Europe, and Russia have all urged both sides to respect the cease-fire agreement.

Prosecutors from both Central Asian states have launched criminal cases into the deadly violence, accusing each other of deliberately 'encroaching' into each other's territory.