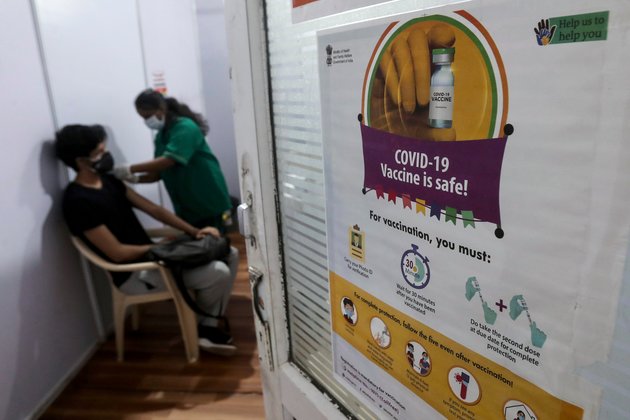 India has reported more than 300,000 new COVIID cases daily for 12 consecutive days. On Monday, the South Asian nation said there had been 368,147 cases recorded in the previous 24-hour period.

While India is home to the world's largest vaccine manufacturer, the Serum Institute of India, only 2% of the country's 1.3 billion people have been vaccinated, according to local reports.

"I don't think even God could have forecast it was going to get this bad," Adar Poonawalla, CEO of the Serum Institute of India, the world's largest vaccine manufacturer, told Britain's newspaper The Sunday Times.

After scathing criticism about his comments during the interview with the newspaper, the 40-year-old billionaire said he was cutting the vaccine's price and that move would enable countries to obtain "more vaccinations and save countless lives."

A woman argues with a doctor as she is turned back following shortage of COVID-19 vaccine at a vaccination center in Mumbai, India, May 3, 2021.

In the United States, President Joe Biden's chief of staff, Ron Klain, told CBS's "Face the Nation" TV show, "we are rushing aid to India." However, the U.S. is also taking measures to prevent the spread of the virus. The White House said Friday that starting Tuesday, the U.S. will stop incoming flights from India.

Australia is also banning flights from India. Australians who do enter the country after traveling to India could face a fine and incarceration.

Indonesian Health Minister Budi Gunadi Sadikin said two COVID variants have entered the country - one from India and the other from South Africa.

Meanwhile, the U.S. Centers for Disease Control is advising travelers to "avoid all travel to Indonesia," saying "even fully vaccinated travelers may be at risk for getting and spreading COVID-19 variants."

Elsewhere, in Brazil, thousands of people marched the streets of Brasilia, Sao Paulo and Rio de Janeiro Saturday despite the surge in COVID cases. People came out in mass in support of President Jair Bolsonaro.

Bolsonaro, who opposes pandemic restrictions put in place by governors and mayors, recently said the army "could take to the street one day, to ensure ... freedom to come and go." Some of Saturday's banners called for a "military intervention" and bolstering Bolsonaro's powers.

The festival was forced to go online due to the pandemic a year ago. Although barriers were set separating the crowd, and security personnel enforcing restrictions, about 11,000 people danced and sang along with their favorite bands on three stages, as some attendees wore masks while many did not, according to the Reuters news agency.

Johns Hopkins Coronavirus Resource Center reported early Monday that there are 152.8 million global COVID cases. The U.S. tops the list with the most infections with 32.4 million, followed by India with nearly 20 million and Brazil with 14.7 million.