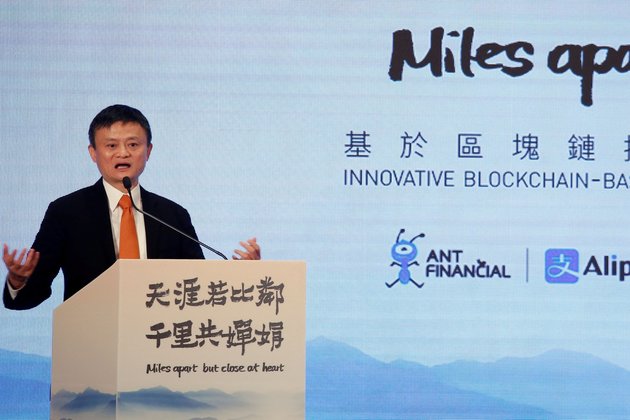 A costly clash between China's top political and business leaders has highlighted the risks for enterprises and finance in the world's second-largest economy.

The conflict between China's government and its richest citizen has led to the suspension of what would have been the world's biggest initial public offering by Ant Group, an online financial spinoff of the giant Alibaba shopping network, the Alipay transaction system and billionaire founder Jack Ma.

In October, preparations for the IPO seemed to be going swimmingly with anticipation that the offering on the Shanghai and Hong Kong stock exchanges would raise U.S. $34.4 billion (227.2 billion yuan), eclipsing the U.S. $29.4- billion placement of Saudi Aramco in 2019.

The surge in investor interest was seen as marking China's return to financial expansion following the COVID-19 slump earlier in the year.

But cracks in the deal's facade suddenly turned into a chasm on Nov. 3 after the Shanghai Stock Exchange announced that the IPO had been called off due to unspecified "changes in the financial technology regulatory environment" and concerns that Ant Group might not meet listing requirements.

The postponement followed one day after Ant Group officials including Ma, executive chairman Eric Jing and CEO Simon Hu were summoned to a meeting for interviews with regulators and government officials, the China Securities Regulatory Commission said in a statement.

Several reports linked the regulatory reaction to a Ma speech on Oct. 24, slamming the government's crackdown on financial risk and the effect on innovation.

"We cannot use yesterday's methods to manage the future," The New York Times quoted Ma as saying.

"There is no systemic risk in China's financial system," Ma said, according to The Wall Street Journal. "Chinese finance has no system," he said.

Regulatory tensions have been building over Ant Group, previously operating as Ant Financial Services Group, which has led the market in issuing securities backed by microloans, according to a Reuters report in 2018.

In December 2017, regulators issued rules to limit the lending based on asset-backed products that companies could make, Reuters said.

In 2018, the People's Bank of China (PBOC) put Ant Financial and four other holding companies in a pilot program to test their ability to manage risks.

In September, the PBOC set new requirements for total assets that financial holding firms can manage, Reuters said in a separate report.

The new rules became effective on Nov. 1, and companies were given a one-year grace period to comply.

But Ma's speech may have crossed a red line with the government, since the campaign to control financial risk was identified by President Xi Jinping as one of China's "three tough battles," along with poverty and pollution, in 2017.

Xi appears to have taken Ma's comments as a personal affront to his power, while Ma's plans for a "one-stop" lending and investment center for smaller enterprises posed a challenge to Xi's policies.

On Nov. 13, the Journal reported that Xi personally made the decision to block the IPO after the speech "infuriated government leaders."

Ma also attacked China's big banks for ignoring the financing needs of smaller borrowers and private businesses, accusing traditional lenders of a "pawnshop mentality" that "hurt a lot of entrepreneurs."

The government has been pressing banks for months to ease access to credit for private enterprises and smaller firms as the economy struggles toward recovery, but the banks still regard such loans as higher risk.

Apparently stung by the criticism of their policies, regulators met and decided to tighten the rules further on online financing and microlending, arguing for uniformity with the policies applied to banks.

The regulators pulled the plug on Ant's IPO the next day.

In the wake of the confrontation, it was possible to see parallels with previous regulatory crackdowns, as well as warnings of the dangers for those who challenge Xi and the government's authority.

The setback for the Ant Group and Ma enterprises invites comparisons to the sweeping curbs on outbound investment that were slapped on high-flying financial groups after an overseas buying spree threatened to destabilize currency flows four years ago.

In December 2016, government agencies and the PBOC warned rapidly-expanding investment groups against "irrational" acquisitions of foreign assets outside their core businesses after a surge of deals raised concerns about capital flight and a loss of hard currency reserves.

The outcome for major investment groups that were once financial powerhouses proved devastating for some.

Anbang Insurance Group, for example, was seized and taken over by regulators in 2018, four years after buying New York's Waldorf Astoria hotel. Its chairman was sentenced to 18 years in prison for fraud and embezzlement. The company has since applied for liquidation.

Other big spenders like HNA Group, a major conglomerate and hotel investor that grew out of Hainan Airlines, have fallen on hard times. In September, its chairman was barred from buying high-speed rail tickets and other luxuries due to unpaid debts, The New York Times reported.

The well-connected founder of CEFC China Energy, another far-flung conglomerate with mysterious sources of financing, was detained for questioning in 2018 and has since disappeared after key company assets were taken over by the state-owned CITIC Group.

It is too soon to tell whether Ma or his holdings will face further consequences for the conflict with regulators.

The Journal suggested that Ant Group "could try again to go public" with reorganization, changes to its business model and a new risk assessment. But the value of the offering is likely to suffer, diminishing its resources and financing role.

The official Xinhua news agency hailed the strong results for Alibaba on Singles Day, the online shopping binge on Nov. 11, suggesting that the government needs the platform to promote consumer demand.

But the IPO episode highlights the risks for investors of airing differences with Xi or his policies.

Investors will also have to distinguish between financial and political risks.

Derek Scissors, an Asia economist and resident scholar at the American Enterprise Institute in Washington, sees differences between the crackdown on overseas investment and the Ant Group dispute.

"This is a domestic action, not international. It's different financially and more important politically," he said.

Scissors argued that the suspension was not part of "prudential regulation," a term that applies to controls such as capital and liquidity requirements to manage risks.

"Ant has been governed by different rules along these lines than banks. It's perfectly reasonable to want to unify the rule, but that could have been done a while ago," he said.

The political overtones in the government's response are likely to dash any notion of regulatory independence in the financial system.

"If it was prudential regulation, they wouldn't have waited until the last second. This is clipping the wings of an independent actor, but it's more important to the (Communist) Party than HNA," Scissors said.

The end of Donald Trump's dysfunctional tenure in the White House means the start of a relatively normal presidency under ...

U.S. President Donald Trump left the White House for the final time on Wednesday, heading by helicopter to a nearby ...

WASHINGTON, DC - With a promise to 'heal' America, which in recent months witnessed a chaotic election and messy transition ...

KABUL, Afghanistan - Major violence has spread, and escalated across Afghanistan.Scores of national security forces and Taliban militants have been ...

JERUSALEM - Israeli authorities should provide Covid-19 vaccines to the more than 4.5 million Palestinians in the occupied West Bank ...

NEW YORK, New York - U.S. stocks rallied to new record highs on Wednesday as the 46th president of the ...

Jack Ma reappears after disappearing from public view 2 months ago

U.S. stocks rose on Tuesday, the last day of Donald Trump's presidency.It was a fitting farewell as numerous records were ...