Dim Future for US-China Engagement as US Ambassador Plans Exit 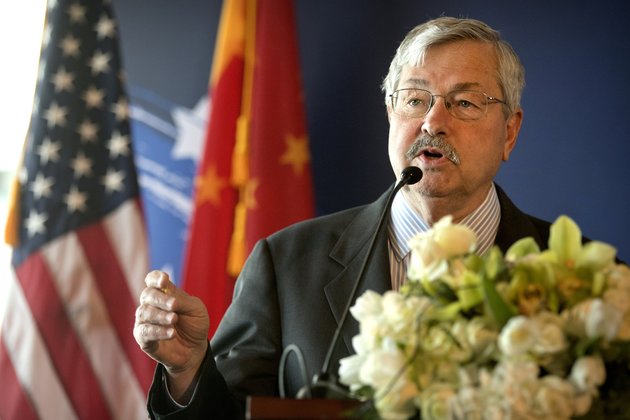 NEW YORK/WASHINGTON - The U.S. ambassador to China, Terry Branstad, announced on Monday that he would step down in early October, ending his three-and-a-half-year tenure in Beijing.

In a tweet that day, U.S. Secretary of State Mike Pompeo said "Ambassador Branstad has contributed to rebalancing U.S.-China relations so that it is results-oriented, reciprocal, and fair."

Analysts say the departure of the U.S. ambassador, a former Republican governor of Iowa, marks another sign that the U.S. engagement policy with China has reached an end.

"Terry Branstad came into the embassy with the hope that they could work something out with China, yet none of that worked out," Orville Schell, director of the Center on U.S.-China Relations at the Asia Society in New York, told VOA.

The U.S. ambassador enjoys special access to China's president from an old friendship.

When Branstad was appointed by President Donald Trump as the U.S. ambassador to China in 2017, many had hoped he would help smooth friction after Trump harshly criticized U.S. trade deals with Beijing during his 2016 campaign.

Yet U.S.-China relations have entered a downward spiral since the COVID-19 outbreak, leaving the folksy midwestern American ambassador little room to use his personal relationship to benefit bilateral relations.

"He must feel he was not performing a constructive function there," Schell added.

Branstad became embroiled in controversy last week when China's state-run newspaper People's Daily rejected an op-ed that he had written. Pompeo tweeted last week that this showed the lack of reciprocity in bilateral relations because the Chinese ambassador to the United States "is free to publish in any U.S. media outlet." China's foreign ministry spokesman said Branstad's article was "full of loopholes and seriously inconsistent with facts."

Schell, a long-time China analyst, said he believes Beijing must accept most of the responsibility for worsening bilateral relations.

"I think it's the whole framework of engagement that kept the two countries more or less stable for over 40 years," he said. "But that framework was essentially killed by China's very aggressive actions in the South China Sea, the Taiwan Strait, Hong Kong, and Xinjiang. And it was unnecessary."

A high-level official from the U.S. Department of State told VOA that during the ambassador's tenure, China maintained a policy of "seek common ground while shelving differences." The official, who asked not to be identified when discussing the current situation, said Beijing's tactic of ignoring policy differences has seriously damaged fundamental U.S. interests.

"The common ground is economic benefit, the difference, however, is differences on politics and universal values," the official said, adding that activities such as forced technology transfer from American companies "pose a severe challenge to America's fundamental national interest."

"The departure of an ambassador won't change anything in this dynamic," the official said.

David Miller, former director of Research and Commodity Services with the Iowa Farm Bureau, said Branstad might also be using his return to the U.S. to help Trump win the 2020 election in a closely fought battle with former Democratic vice president Joe Biden.

"Governor Branstad is well respected, particularly in Iowa. And Iowa is a swing state," Miller said.

CNN reported that Branstad is leaving his post earlier in part because Trump "asked" the former Iowa governor to come back and help him campaign. The ambassador's son, Eric Branstad, is already working on the Trump campaign.

Calla Yu contributed to this report.

Life could be habitable underground on Mars, scientsts say

MASSACHUSETTS, September 23 (ANI): Recent science missions and results are bringing the search for a life closer to home, and ...

Frantic efforts to rescue whales trapped on sandbars off Australia

PanARMENIAN.Net - Rescuers were scrambling on Tuesday, September 22 to save 270 whales stranded off the coast of the Australian ...

CAMBRIDGE, UK - Scientists at the Massachusetts Institute of Technology (MIT), along with others, have discovered an Earth-sized "Pi Planet" ...

U.S. goes it alone on Iran sanctions, setting stage for showdown at UN

SYDNEY, NSW, Australia - Stocks in Australia took off on Wednesday, following the lead in the U.S. and Europe overnight. ...

Uzbekistan turns to its massive gold reserves for economic relief

TASHKENT, Uzbekistan - Uzbekistan is turning to its massive gold reserves to help fight its way out of an economic ...