Ford Endeavour (Everest) becomes half an F-150 Raptor in Thailand 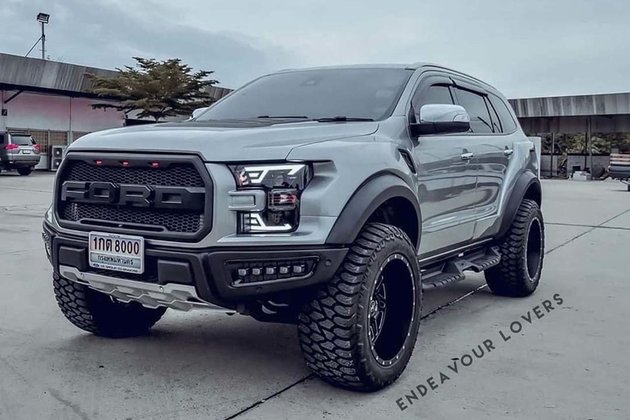 India is the only market in which Ford's popular mid-size SUV, Everest is called the Endeavour. The Ford Everest is currently in its third generation and the Indian-spec Ford Endeavour was updated to BS6 emission norms earlier this year, alongside significant improvements in terms of equipment and powertrains. Minor cosmetic changes were also part of the package.

Meanwhile, the international-spec Ford Everest received a new 2.3-litre turbo petrol engine. The power plant has hit the Chinese market and will be introduced in other potential markets in the months to come. The American automaker has a strong presence in Asian markets thanks to a compelling choice of UVs (including pick-ups). If we take the Thai automotive market, Ford offers the Everest SUV, Ranger pick-up and its sportier Ranger Raptor variant.

Among Ford enthusiasts (and pick-up truck fans in general), the Ford F-150 Raptor is an extremely desirable alternative to the regular purpose-built F-150 range. We have come across several Raptor conversions in the past and the usual 'victim' of this is the Ford Ranger. The Ford Endeavour/Everest is also a popular choice in showcasing some Raptor flair (such as the imposing 'F-O-R-D' grille). Here is an example from Thailand that has become half an F-150 Raptor:

The modification has clearly opted a form-over-function approach but has helped add some presence. It is certainly not a major visual enhancement over ‘stock' as the proportions seem a bit out of place from certain angles. Observe closely and you will be able to find some uneven panel gaps around the fenders (especially at the base of its A-pillars).

Besides higher ground clearance (arguably excessive), there are no added benefits to its off-roading capability either. However, the market for such customisations is strong across the world and one cannot put a price on taste.

Ford Thailand's Ranger Raptor pick-up is powered by a 2.0-litre twin-turbo diesel four-cylinder motor, churning out 210bhp and 500Nm of torque. A 10-speed automatic transmission sends the output to all four wheels. In comparison, the Everest is available in both petrol and diesel formats with optional AWD.

WASHINGTON, DC - The Trump administration has ordered 100 million doses of a COVID-19 vaccine candidate to be manufactured by ...

Hong Kong newspaper fights on despite arrest of proprietor