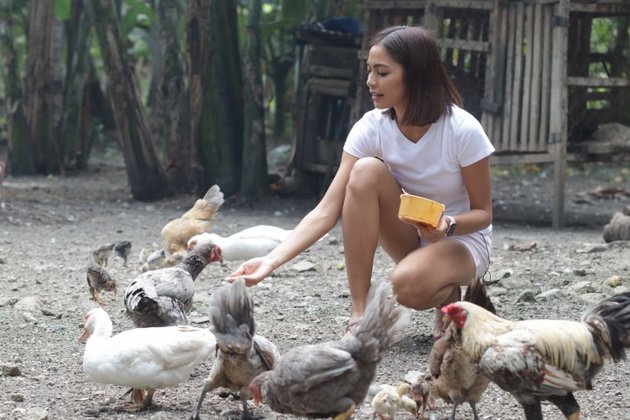 DAVAO CITY- A journalist, a model/beauty queen hopeful and an entrepreneur. Three women with different cosmopolitan backgrounds have ventured into farming, they are the new generation of farmers and agri-entrepreneurs injecting life into an industry with an aging workforce. (According to data from the Department of Agriculture, Filipino farmers have an average age of 60 years old).

With varied backgrounds, each had a different story to tell, but all that is certain, agriculture is slowly beckoning to young female millennials. And each hopes to inspire people to follow their path.

The journalist turns to farming

Diana Lhyd Suelto, 38 was a journalist before she became an organic farmer. Diane as she is called by friends, was a news reporter for a Davao City-based daily and for eight years the city was her beat.

Born to a family of farmers, the concrete jungle was what she considered home until the call of farming came.

"At first I wanted to sell the farm my sister and I inherited from our grandmother, but changed my mind after I read the profitability of growing falcate trees. So my sister and I started filling the unproductive areas of our farm with falcate," Diane recalls the time she laid eyes on agriculture.

Her organic vegetable business came serendipitously. Diana and a friend was consoling another friend at a coffee shop when she picked up a newspaper and found an article about millennials going into farming.

Diane like the idea and dove into the business the next day. The friend they were consoling would rent out their unused family farmland. They enlisted the help of another friend who just finished an organic farming course. From there the group established an organic farm where they grow vegetables such as lettuce, kale, pechay and bukchoi.

Diane says that farming has its share of challenges.

"At the beginning the most challenging part was how make our crops grow faster and healthier. After we discovered that, marketing became a challenge. Currently, we are in need of fresh input for infrastructures and farm equipment. Getting manpower is also a big challenge. Young people don't want to work in farms anymore," Diane said.

She says what powers her is the dream of achieving food sustainability not just for her family but also for the entire Davao City.

"Growing not just any food, but healthful, safe food. Whenever I see a vacant lot the first thing that comes to mind is that can be transformed into a garden or chickens can be raised there. There are many times that I wanted to give up. But the dream of sustainability just wouldn't die. Farming is also in my blood. My lola (dad's mom) was a farmer. She singlehandedly managed the family's farm even after until she got blind. My mom loved to garden. It's in my DNA," Diane said.

One of the reasons why she loves farming is its unpredictable nature "Everyday is different at the farm. Sometimes the work is backbreaking like making plots or soil prep, because we have zero farm equipment (yet). Other days I plant or weed. There are also days where I just go around checking what needs to be done,"

Diane says that even on the most tiring days the satisfaction brought by farming is incomparable.

Samantha Kamil Sasin, 28 used to work in her family-owned manpower agency but resigned as she did not like office work. Sam would apply for a pharmaceutical company, but her dad Joseph had other plans.

"My dad said he needed me to be in the farm since it's our family business, I ended up loving what I do," Sam recalls.

As the farm's operations manager, Sam checks into their farms in Calinan and Biao. She oversees the progress and the improvements needed in a certain area. She dons her farming get-up which consists of a red cap, boots and a jacket.

"I go from area to area depending on my schedule for that day. There are times wherein I would try to practice some activities that our workers do, so that I would also have knowledge," Sam describes the usual day at the farm.

A mother of a seven-year old kid and the current president of the Junior Chamber International (JCI) Davaoena Daba-Daba, Sam skillfully balances the life of a farmer with that being of a mother and head of an active civic organization.

Sam recalls the challenges in farming she had to learn from the beginning. "Since I'm not an agri-graduate, I had to learn everything from the start, until now I'm still learning from my dad. The challenge with agriculture is you cannot control mother nature, you just have to be prepared or be ahead," Sam said.

However, the challenges is dwarfed by the endless opportunities in agriculture particularly when you have a raw product you can process and developed it through research. Sam says you have to constantly learn to succeed as research is very important in the business.

She says young people's preference for adapting new technologies and trends complemented by their unprecedented access to a wide range of information in the internet is well suited to agri-business whose unlimited potentials can be unlocked by new knowledge.

The farm girl eyes the Universe

An international print and ramp model who has graced the catwalks of Manila, Los Angeles and Bali and whose face has appeared in glossy magazines, lifestyle pages of national broadsheets and billboards. But throughout her success in the modeling world, 26-year old Alaiza Flor Malinao never forgot her roots as a simple farming lass in Sulop, Davao del Sur.

"I came from a family of copra farmers in Tala-o, Sulop, Davao del Sur," Alaiza Malinao proudly declares her agricultural lineage. She grew up in a coconut farm, proceeded to Davao City for schooling where she finished B.S. Psychology in San Pedro College. After earning a degree, she went to Manila to pursue a career as a professional model.

She shot to fame via the Asia's Next Top Model competition in 2016. A year before that she joined Binibining Pilipinas where the crown went to her friend Pia Wurtzbach who eventually bagged the Miss Universe crown in 2015.

A successful modeling career took a backseat as Alaiza decided to chase a childhood dream by joining the 2020 Miss Universe-Philippines where she will represent Davao City.

Alaiza's main advocacy in the pageant is FARMING. In the ongoing competitions (the pageant was rescheduled due to COVID 19) Alaiza would never fail to advocate for agriculture. For her it wasn't a mere token slogan, it was a passion, it was a part of her.

"Way back then, I was really interested about farming, and also when I was growing up, I was interested in joining the Miss Universe. So aside from setting up a farming business because that is a career I would want to do, I thought why not incorporating it as my advocacy in the Miss Universe Philippines pageant," Alaiza said.

By promoting agriculture using the Miss Universe platform Alaiza wants to share a positive narrative about farming, one filled with hope and success stories which she hopes to inspire the youth to go into farming.

During her return visits to Sulop, Alaiza would gather the young people in her community to talk about farming, taking them to a fledgling agri-business project she put up in the village which would hopefully bring livelihood and eventually attract the youth to the potentials of farming.

Alaiza says that when many would venture into farming, these would help many farmers.

"For example millenials who can invest, they can invest in agriculture like cacao farming, the one would take care of their farms are the farmers and if these businesses becomes regular, these would translate to livelihood for the farmers," Alaiza says.

"The reason why I chose farming as an advocacy aside from being a wealth generator, this is way to recognize the country's unsung heroes, the farmers who worked hard to toil the land and bring food to our table, imagine our unsung heros being recognized in the Miss Universe platform," she said. (PIA/RG Alama)