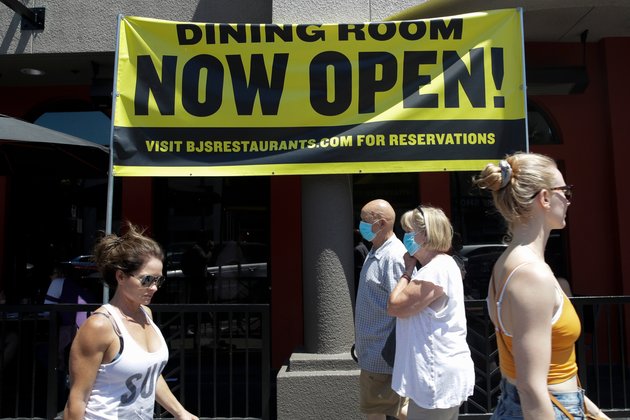 Coronavirus cases are also surging in the south-central U.S. state of Texas, where more than 5,700 new cases were reported Saturday, and 42 more deaths brought the state's total to nearly 2,400. The state's governor, Greg Abbott, has again scaled back restaurant dining and shut bars.

"If I could go back and redo anything, it probably would have been to slow down the opening of bars, now seeing in the aftermath of how quickly the coronavirus spread in the bar setting," Abbott said in an interview Friday evening on KVIA television in the city of El Paso.

Vice President Mike Pence will go ahead with a campaign event Sunday in Dallas, Texas, where he will attend a "Celebrate Freedom Rally" at First Baptist Church Dallas and then meet with Abbott.

Almost 250 miles south of Dallas, Houston and Harris County, a judge raised the COVID-19 threat level to red, the highest.

"The harsh truth is that our current infection rate is on pace to overwhelm our hospitals in the very near future," Judge Lina Hidalgo said.

The U.S. continues to lead the world in the number of confirmed infections with nearly 2.5 million, about one-quarter of all reported infections worldwide, according to the CDC. Brazil follows the U.S. with almost 1.3 million cases, while Russia comes in third with nearly 627,000. Brazil's death toll rose to more than 57,000.

Across Latin America, the number of cases has passed 2 million, the Pan American Health Organization said. Colombia reported 4,149 new cases Saturday, the third time in a week it has seen a new single-day high of new cases. Colombia now has 88,591 total cases, a number higher than the total reported by China, 84,726.

A troubling rise in infections was also reported in India, where the Times of India newspaper said the South Asian nation recorded 18,552 new COVID-19 cases Saturday, surpassing Friday's record of 17,296.

In South Korea, new clusters are popping up in Seoul, where hundreds of infections have been traced to churches, night spots and restaurants.

And Indonesia reported its biggest daily increase in coronavirus infections with 1,385 new cases, taking the total to 52,812, a health ministry official said.

But Italy - one of the worst-hit countries early in the pandemic - appears to be moving in the opposite direction. Officials on Saturday reported 175 new infections and just eight deaths, its lowest single-day total since March 1.

Elsewhere, the Australian state of Victoria recorded 41 new COVID-19 cases Saturday, marking 11 consecutive days of double-digit infections after the country appeared to have brought the contagion under control. Australia said it would continue to reopen its economy despite the rising number of infections in Victoria.

Meanwhile, European Union officials said travelers from the U.S., Russia and a number of other countries that have not reduced their COVID-19 infections will likely not be allowed into EU countries when the bloc reopens July 1.

The UN Children's Fund (UNICEF) is working with more than 350 partners, including major airlines, shipping lines and logistics associations ...

If you're a fan of TV crime procedurals, you've no doubt seen shows where detectives interrogate two suspects detained in ...

As authorities in Iraq continue to operate "in the eye of multiple storms", international support remains essential for resolving ongoing ...

WASHINGTON, DC - The General Services Administration has ascertained that President-elect Joe Biden is the "apparent winner" of the November ...

Microsoft to increase Dublin workforce to 2,700

DUBLIN, Ireland - Microsoft Ireland is to create 200 engineering roles to strengthen its existing Dublin-based team of over 600 ...

SYDNEY, NSW, Australia - The Australian stock exchange was the lone ranger, selling off on Thursday, while the rest of ...

BEIJING, China, November 26 (ANI): Despite the growing disquiet between Taipei against Beijing, Chinese technology companies have increased orders for ...

DUBLIN, Ireland - Irish whiskey and Irish cream have been given a boost by their special designation by one of ...

QUEZON CITY, Philippines, Nov. 25 (PIA) - The Department of Energy (DOE) is preparing for a low carbon scenario as ...

Microsoft to increase Dublin workforce to 2,700

DUBLIN, Ireland - Microsoft Ireland is to create 200 engineering roles to strengthen its existing Dublin-based team of over 600 ...