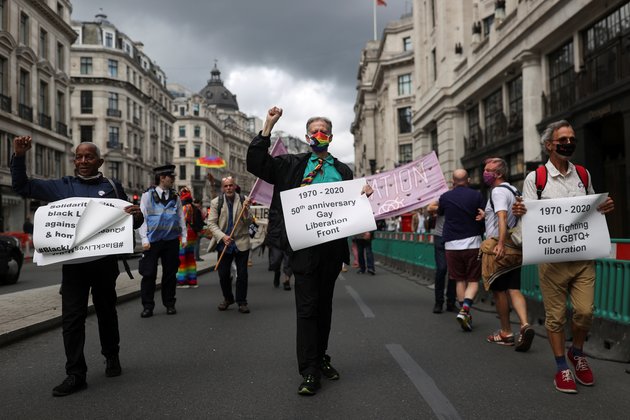 NEW YORK/LONDON - As thousands of people marched in support of Pride and racial justice globally this weekend, many demonstrators called for an end to often-overlooked racism within the LGBT+ community.

Pride events to celebrate LGBT+ rights are held globally throughout June - although most were canceled or moved online this year because of the coronavirus pandemic - but the emergence of protests over racial injustice spurred a series of live events.

While studies show LGBT+ people of color are more prone to violence and poverty, a 2018 Stonewall/YouGov survey also found more than half of Black, Asian and other minority LGBT+ Britons experienced discrimination from members of their own community.

"As far as we've come, a lot of the strides made have been for white members of the [LGBT+] community and we're still seen almost as second-class citizens."

Racial inequalities globally have come under the microscope following the death of George Floyd, 46, in police custody in the United States on May 25.

Many LGBT+ groups released statements in support of protests after Floyd's death, pointing out the radical origins of the LGBT+ rights movement at the Stonewall Inn in New York 51 years ago that emerged to fight police brutality.

"As a queer person myself, I face racism from the queer community - and it's time we stamped it out," Patrick King told the Thomson Reuters Foundation as he marched along one of central London's main thoroughfares with car horns blaring. London's Black Trans Lives Matter march was one of several events planned this weekend to support Black Lives Matter.

College student Donald Arrington, 19, who was due to take part in an informal Pride march in Los Angeles on Sunday, said he had been rejected on LGBT+ dating apps because he was Black.

On Sunday, thousands of people are expected to attend New York's Queer Liberation March, an event moved online because of the coronavirus but then back to the streets after the protests against police brutality and racism after Floyd's death.

"There needs to be the element of people in the streets and popular revolt and outrage," said Natalie James, co-founder of the Reclaim Pride Coalition, which is hosting the march. "There's not really a substitute for it."

But Ed Brockenbrough, a professor at the University of Pennsylvania, said the move by Pride organizations to adopt Black Lives Matter issues did not go far enough to address racism in the LGBT+ community.

"Activism in Black and brown queer communities has been happening for a long time without full buy-in from white gatekeepers of queer resources," said Brockenbrough, whose research focuses on the challenges of LGBT+ people of color.

For Ted Brown, a veteran of Britain's Gay Liberation Front marching in London on Saturday, not enough has changed since he was out on the "scene" in the 1970s.

"[Racism] remains an issue within the LGBT+ community," Brown told the Thomson Reuters Foundation as banners and placards were unfurled and raised around him.

"If you look around here, for example, I'm one of the few Black people here. ... The LGBT+ community needs to look at themselves and find out how they can become more diverse."

ABU DHABI, UAE - A phone call by U.S. President Donald Trump clinched what is being described as an 'historic ...

The catastrophic blast which led to the deaths of more than 200 in Beirut on 4 August, has prompted more ...