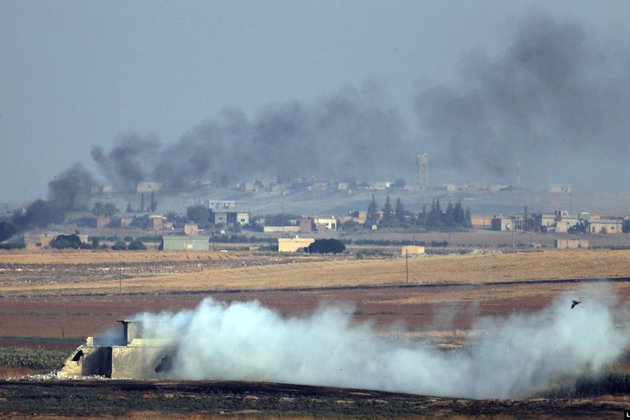 Turkish ground forces have pressed their advance on the second day of their offensive against Kurdish-led forces controlling Syrian territory along the border with Turkey.

President Recep Tayyip Erdogan on October 10 rejected international criticism of the military operation east of the Euphrates River, reiterating that the offensive was aimed at 'eliminating terror' along Turkey's borders.

Turkish armed forces earlier said they had struck 181 targets with air strikes and howitzers since the start of the operation.

The SDF said they held off an incursion attempt near the border town of Ras al-Ain and repulsed a ground assault on Tal Abyad.

The Syrian Kurdish-led authorities also accused Turkey of shelling a prison in Qamishli holding Islamic State (IS) militants, calling it 'a clear attempt' to help them escape.

Tens of thousands of people are reported to be leaving their homes in the conflict zone, including dozens of ethnic Armenians.

Erdogan says the aim of the offensive is to create a 'safe zone' cleared of Kurdish militias that will also house Syrian refugees.

The operation began after President Donald Trump ordered the withdrawal of U.S. troops from the area in a move that triggered criticism at home and international concerns.

In an interview with broadcaster PBS, U.S. Secretary of State Mike Pompeo called allegations that the United States allowed Turkey to launch the assault 'just false,' and insisted that Washington didn't give Ankara a 'green light.'

He also said that Turkey had a 'legitimate security concern' and 'a terrorist threat to their south.'

France, Germany, Britain, Belgium, and Poland have called for a closed-door UN Security Council meeting on Syria for October 10.

And the Arab League, consisting of 22 states, is to hold an emergency meeting in Cairo on October 12 to discuss Turkey's assault.

Speaking to lawmakers from his Justice and Development Party in Ankara on October 10, Erdogan threatened to 'open the gates' for Syrian refugees in his country to Europe, telling the European Union, 'You cannot label our operation as an invasion.'

Meanwhile, Iran's Foreign Ministry called for an 'immediate' halt to Turkey's offensive and the withdrawal of Turkish troops from Syrian territory, citing concerns about the humanitarian situation and the dangers to civilians in the conflict zone.

During a visit to Turkmenistan, Russian Foreign Minister Sergei Lavrov said Moscow will push for dialogue between the Syrian and Turkish governments.

Lavrov alleged that Turkey had not been able to properly raise its 'legitimate concerns about the safety of its borders' with Damascus because of 'the actions of the Americans and the coalition' east of the Euphrates River.

In Yerevan, Armenian Prime Minister Nikol Pashinian called on the international community to take measures to stop Turkey's 'illegal actions' in Syria and 'protect the rights of Syrian citizens, including ethnic minorities, living along the border with Turkey.'

'Our embassy in Damascus is in constant contact with community leaders, and they do not want to be evacuated at this time,' Melkonyan said.

The Syrian conflict began with a government crackdown on protesters in March 2011 and has since killed more than 400,000 people and displaced millions.

U.S. senators on October 9 announced a bipartisan bill was being drafted to sanction the heads of the Turkish political leadership, including President Recep Tayyip Erdogan, and the country's military and energy industries.

The bill would likely freeze U.S. assets of the top Turkish politicians and impose visa restrictions on officials. It would further seek to block the global sale of military equipment to Ankara, including U.S. ammunition sales, Reuters reported.

Part of the draft law proposes placing sanctions on Turkey over its purchase of a sophisticated Russian air-defense system that is not compatible with NATO capabilities.

NATO chief Jens Stoltenberg said Turkey, a NATO member, had 'legitimate security concerns,' yet it was 'important to avoid actions that may further destabilize the region.'

Turkey's ground offensive on October 9 was preceded by hours of shelling by warplanes and artillery over territory held by Kurdish-led forces.

Erdogan said the purpose of the assault was to create a 'safe zone' and targeted Kurdish militants and the Islamic State (IS) group in northern Syria.

Turkey had long threatened an attack on the Kurdish fighters whom Ankara considers terrorists.

With reporting by the BBC, AFP, Reuters, AP, and dpa