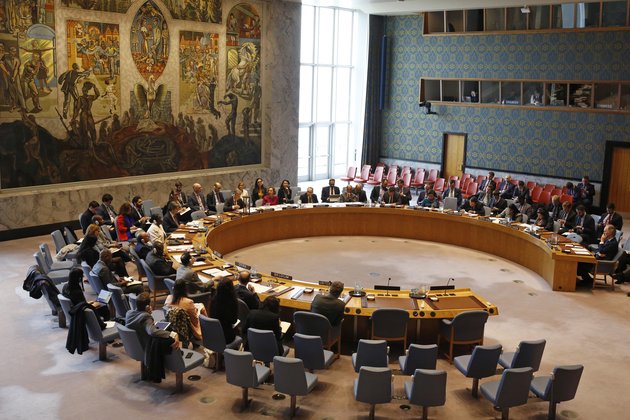 "The council decided to remain united on the issue and encourage DPRK and the U.S. to go back to Stockholm, to Sweden, for the discussions on this matter," South African Ambassador Jerry Matjila said. DPRK is the acronym for North Korea's official name.

Council diplomats were briefed by U.N. Assistant Secretary-General for Middle East, Asia and the Pacific, Khaled Khiari, on the missile, which was launched from a submarine.

U.S. deputy U.N. Ambassador Jonathan Cohen represented Washington at the meeting, which lasted less than an hour. Diplomats said he did not offer any new details of the bilateral talks that broke down on Saturday in Sweden between the U.S. and North Korea.

Diplomats said China linked the launch to the lack of progress in talks with the U.S.

On Monday, DPRK U.N. Ambassador Kim Song said that raising the issue of its missile tests at the Security Council would "further urge our desire to defend our sovereignty," the Reuters news agency reported.

Germany, Britain and France called for Tuesday's discussion. Afterward, they were joined by the other European members of the council Belgium and Poland - as well as Estonia, which will take a seat on the council in January - to express their "deep collective concern" about North Korea's behavior.

"We reiterate our condemnation of these provocative actions: They undermine regional security and stability and they are in clear violation of U.N. Security Council resolutions," France's U.N. ambassador, Nicolas de Riviere, told reporters on behalf of the group. "It is vital that the Security Council upholds its resolutions. International sanctions must remain in place and be fully and strictly enforced."