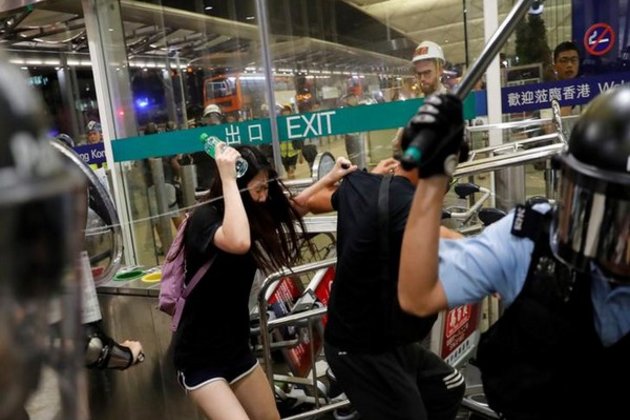 Flights from Hong Kong were cancelled or delayed for the second consecutive day, as hordes of protesters blocked departure areas. Violent clashes broke out between police in riot gear and protesters at Hong Kong's airport on Tuesday.

Hong Kong government condemned the recent demonstrations of protesters at the Airport which resulted in violence and attacks on police.

"The Government severely condemns these violent acts, which are outrageous and have overstepped the bottom line of a civilised society. The Police will take relentless enforcement action to bring the persons involved to justice," the statement said.

Amidst the chaos, protesters detained a reporter for Chinese state-run newspaper Global Times and zip-tied him to a luggage cart.

Hong Kong has been in the throes of protests since early June. The demonstrations were triggered by a now-suspended bill which would allow suspects to be extradited to China to face trial.

Even though the bill has been suspended by local authorities, the protests have continued and taken on a more pro-democracy outlook. Protesters have also demanded an inquiry into police authority and alleged brutality. Several clashes have taken place between protesters and the police ever since the beginning of the agitation.

China has decried the protests, with one Chinese official alleging that the demonstrations have "begun to show signs of terrorism." (ANI)

Prince Harry and Meghan to cut formal ties with Palace

More than one billion mammals, birds, and reptiles across eastern Australia are estimated to have been affected by the current ...

Decriminalisation of blasphemy in Ireland comes in to effect

DUBLIN, Ireland - The commencement of the Blasphemy (Abolition of Offences and Related Matters) Act 2019 in Ireland has taken ...

WASHINGTON, DC - High profile lawyers Alan Dershowitz and Ken Starr have been brought in to work with the legal ...

BERLIN, Germany - Warring factions engaged in the Libyan conflict and UN-Secretary General Antonio Guterres will take part in a ...

WASHINGTON, DC - The Pentagon on Thursday awarded more than half-a-billion dollars in defense contracts.With around 0.53 cents in every ...

SYDNEY, Australia - Stock markets in Asia finished in the black on Friday, despite the release of economic data in ...

WELLINGTON, New Zealand - The New Zealand government's books are in good shape with the accounts in surplus and expenses ...

MANILA, Philippines - The Asian Development Bank (ADB) returned to the U.S. dollar bond market on Wednesday with the pricing ...